How to Recover and Tuft an Ottoman

by LeAnn Michelle | Jul 19, 2013 | DIY tufted ottoman, drop cloth projects, how to recover an ottoman, how to tuft an ottoman, tutorials | 7 comments 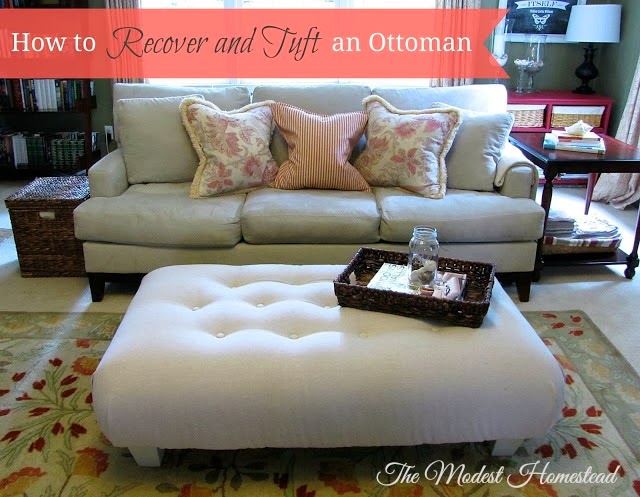 So Maddy my two year old is going through a stage where she thinks the house is her canvas. Although I’m all about encouraging her creativity I’m not happy about her getting creative all over the furniture. It never fails no matter how hard I try to keep ink out of reach sure enough she will find a pen or marker somewhere and I’ll find little traces of artwork throughout the house. One of her latest creations was on the ottoman. It was really time for it to be recovered anyway so that was the final straw to encourage me to give it some much needed attention. 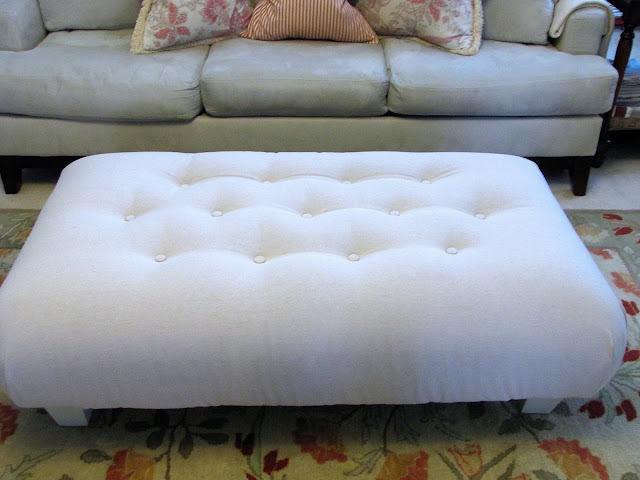 I love tufted furniture. I would have gotten a tufted sofa when we replaced ours last year but alas, the one I wanted was about a thousand dollars over our budget. Boo. So I decided to tuft my ottoman. It’s really much easier than you may think. This is the same ottoman that we found on the side of the road about five years ago. We brought it home, ripped it apart, cleaned it up and recovered it. This is its third time being recovered and I assure you it won’t be the last. 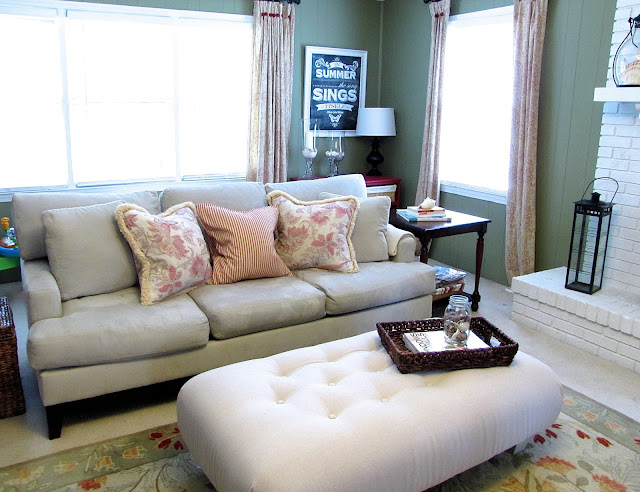 So here we go… How recover and tuft an ottoman.
You will need:
A good staple gun and staples
Flathead screwdriver
Fabric
Foam 2″- 3″ thick
Batting
Spray adhesive
Covered button kit
Fabric Scissors
Hammer
5″ craft needles
Upholstery thread
First, I started by unscrewing the legs and ripping the old fabric off of the ottoman. 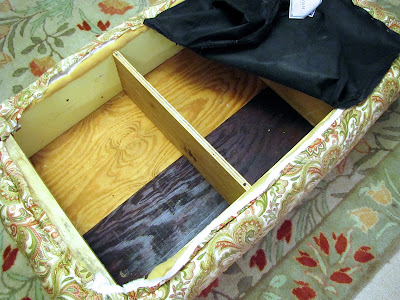 I used a flat head screw driver to remove the old staples. 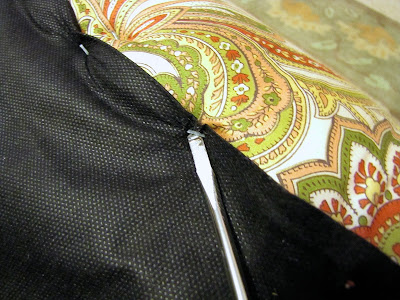 Since I had already replaced the foam and batting when we recovered it the first time and it was still in good condition, I left it in tact. This is done basically the same way you wrap your fabric as I will show you below.  I had the foam laying flat on the ground and then I sprayed the top part of the wood on the ottoman with spray adhesive. If your ottoman is big you will want to have someone help you flip it over and lay it directly in the middle of the foam. Then you can continue to pull the foam up over the edges and staple it to the wood on the bottom of the ottoman. Then just wrap the batting over the foam and staple it the same way. 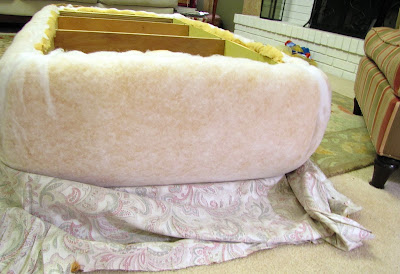 Next came the drilling of the holes for the tufting. I drilled them from underneath since my foam was already on the top. I just decided on a pattern I liked and measured it out underneath the frame. I marked each place with a dot and then using an electric drill drilled the holes through the wood. This would be easier if done from the top so if you are covering yours for the first time you will want to draw out your pattern on the top and drill the holes before you put the foam and batting on. 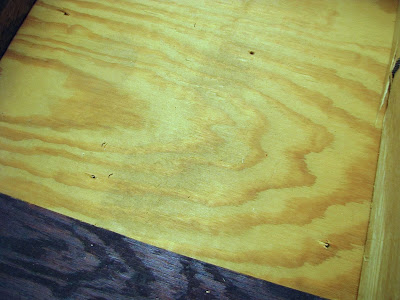 Next, I wrapped it in fabric. I used a canvas drop cloth from Home Depot. It was cheap so if (and when) Maddy does decide to draw all over it, I might not cry as hard. The canvas drop cloth actually went better with the color of my sofa than the original canvas fabric I had purchased from the fabric store. Luckily that will come in handy as I may have to recover the white chair Maddy recently drew on with a pink sharpie. Any suggestions as to how to get sharpie out of a chair would be much appreciated. I’ve tried everything. 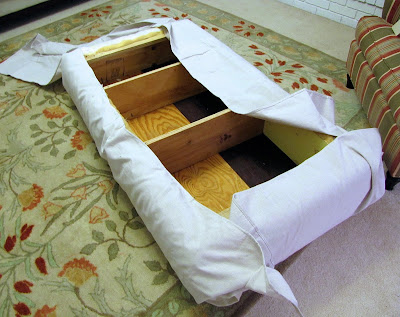 I ironed the fabric first since it had fold marks from being folded up in the wrapping. Then, I pulled it tight and stapled the edges down to the wood underneath the ottoman. You can see how I did the corner in this photo. 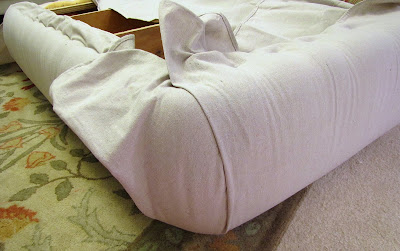 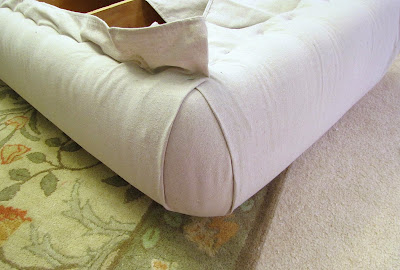 I left about an inch or so between each staple. 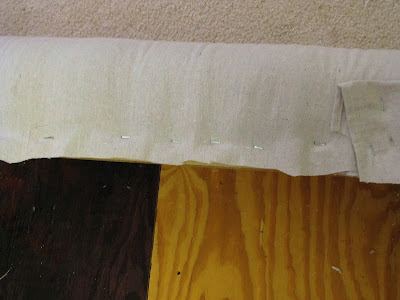 Next, I trimmed all the excess fabric from around the edges with my scissors. Now if you’re not planning to tuft your ottoman you can just staple some fabric to the bottom, screw the legs back in and you’re good to go. If you would like to tuft it… read on. 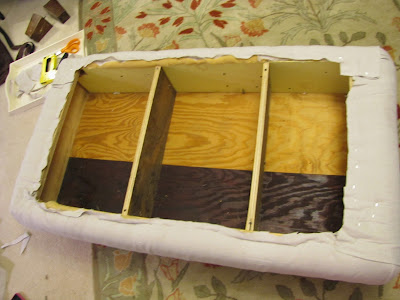 I found these long 5″ needles at Hobby Lobby. 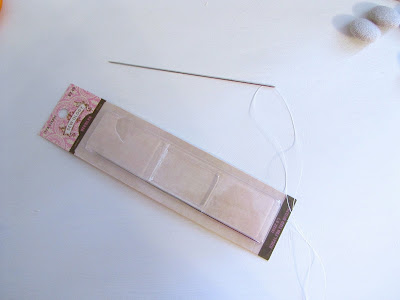 I threaded the needle and poked it through the bottom side of the ottoman. After the second button I got smart and decided to double up the thread in the needle just in case so it actually has four strings going through it instead of two. You need to leave quite a bit of thread left over at the bottom to staple it to the wood. I think I used 5 or so arm lengths of thread each time since I doubled it. You will have to try it out and see what works for you. 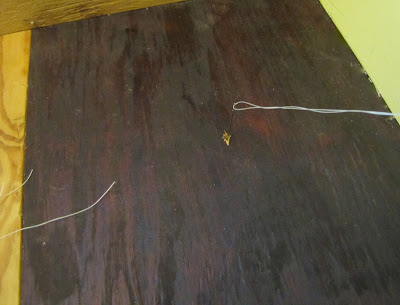 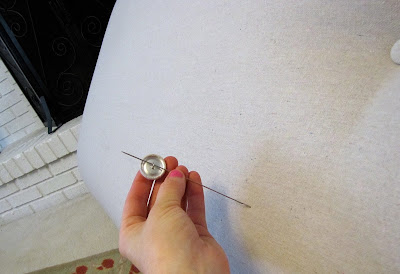 Ok, Now that the needle has been pushed back through the top of the ottoman you need to pull the thread really tight so that the button pushes down the foam. I used my staple gun to staple down the thread. You will just need to staple it down in different directions so the thread doesn’t slip out. I tied a knot in the thread at the last staple and cut off the excess thread. Some of the staples didn’t want to go down all the way so I used the hammer to hammer them down the rest of the way. 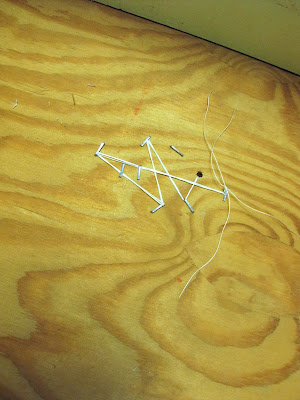 After it’s all done the bottom looks like this. 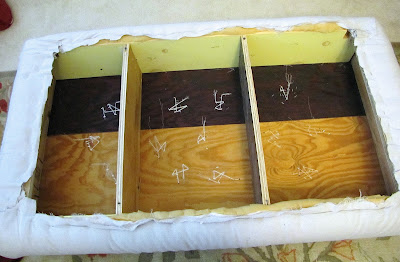 I used some drop cloth left over from another project and stapled it to the bottom to cover up the ugly part underneath. 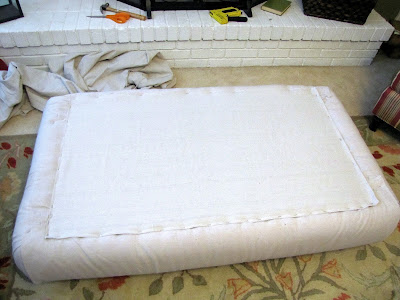 Then I screwed the legs back into the bottom. I would love to get some different legs for this but for now I just painted them with some left over sample paint. 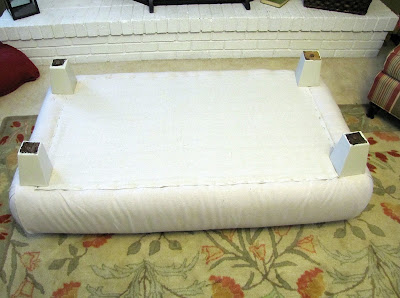 Flip it over and voila! Finished! 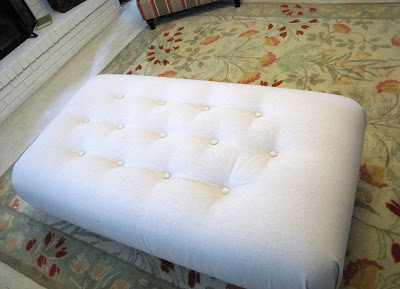 I think I found a quicker way to tuft. (Wouldn’t you know not until after this was finished.) I will be trying it out soon on another project. Tutorial for that coming up! 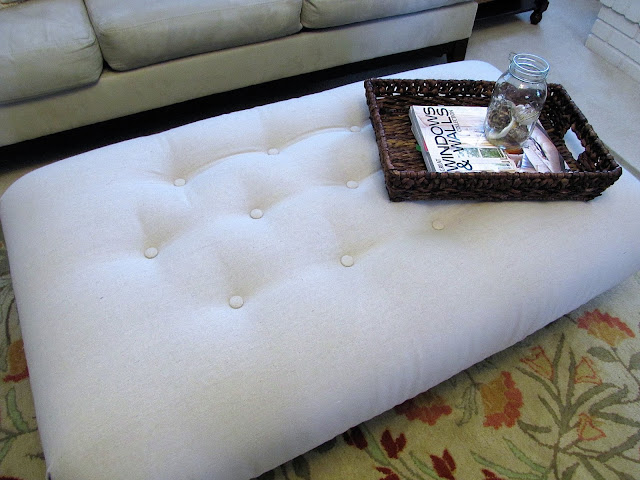 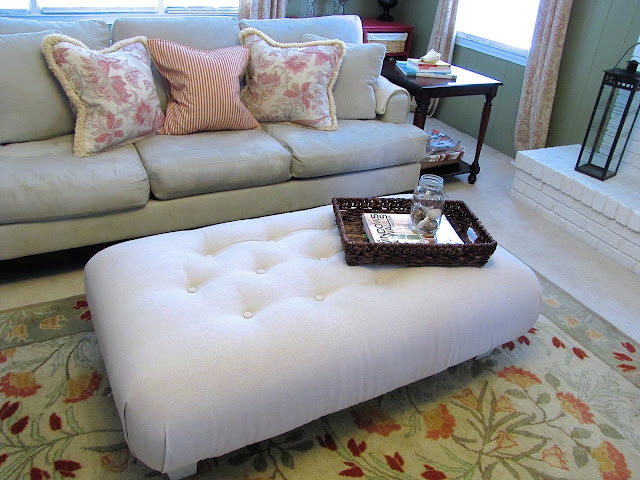 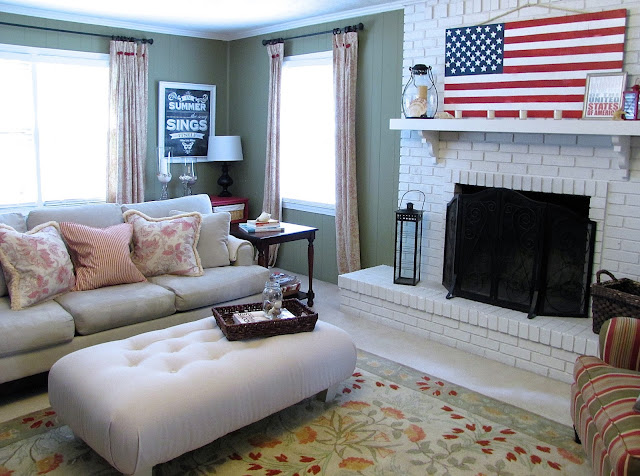 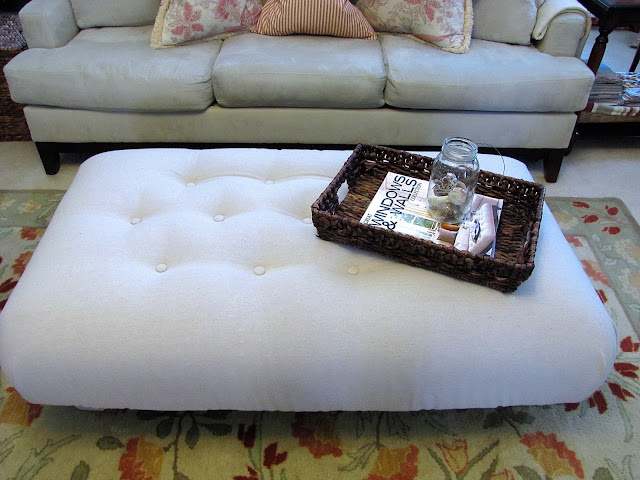 Linking up with Ella Claire Inspired.