Can I just say I love Pinterest!! So many fun ideas! Well I found this idea for an American Flag cake and since I was making dessert for the 4th of July I thought I’d give it a try. Here is how I made it. 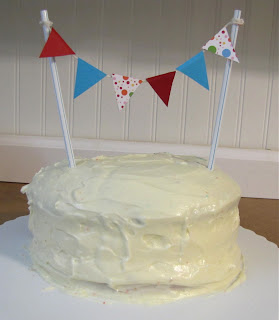 First I made two vanilla cake mixes from a box. You could use any recipe, I just happen to be a big fan of Duncan Hines French Vanilla. Butter and flour the bottoms of two 8″ baking pans and line with wax paper to prevent sticking. Prepare one batch of cake mix and color it red with food coloring. Divide it evenly between the two pans and bake according to package directions. Let cool completely.
While the red cakes are baking prepare your other batch of cake mix. Pour half into one bowl and color it blue while leaving the other half white. Once your red cakes are done cooling remove them from the pans. Wash, the pans and prepare them for the next batch. Pour the blue mix into one and the white in the other. Bake and let cool.
So now you should have a total of 4 cakes: two red, one blue and one white. 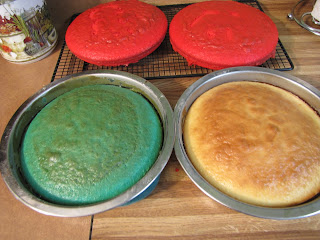 Cut your two red cakes in half horizontally and set one layer aside (this one will not be used). Cut a 4″ circle out of one of your red cakes. So you will have two 8″ red cakes and one 4″ red cake. I made a template out of the cardboard cake box and cut the circle out with a knife. I used the same template to cut a circle out of the middle of the blue cake. 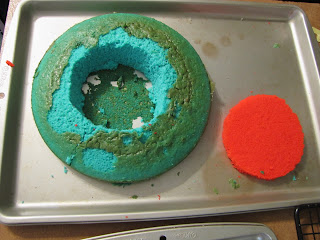 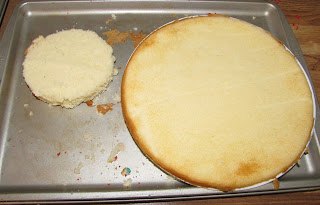 **Here is one very important step that I should have done but didn’t. You know how your cake puffs up in the oven and has like a round shape at the top??? Well you probably already know this but it needs to be cut off so the the cake is flat and can stack easily. I had to learn the hard way!! A little piece of the top layer of the cake started falling during the icing process. I just ended up cutting that slice out before we left for out 4th of July get together and luckily no one seemed to mind I brought an already sliced cake to the party (I explained to them what happened of course!)!!
So you should have…
2 – 8″ layers of red
1 – 4″ layer of red
1 – 8″ layer of white
1 – 4″ layer of white
1 thick layer of blue with the center cut out
Now you assemble the cake with a thin layer of frosting in between each layer of cake. Start with the red at the bottom. Then the white, then red again, then the blue. Inside the hole of the blue cake add the 4″ white then 4″ red layer using frosting in between the layers and on the edges of the blue ring to help it stay in place. Refrigerate until ready to serve.
Now each person will get an American flag on their dessert plate! So fun! 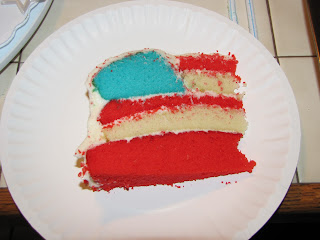 Here is the cream cheese frosting recipe I used..
1 stick butter, at room temperature
1 8 oz. cream cheese at room temperature
1 teaspoon vanilla extract
4 cups powdered sugar, sifted
4 tablespoons heavy whipping cream (could use milk instead)
Directions:
Blend butter in a large mixing bowl. Add the cream cheese and blend until combined, about 30 seconds. Add vanilla extract and sifted powdered sugar and blend on a low speed until combined. Increase to a medium speed and blend until it gets fluffy. Slowly add the heavy cream a little at a time until the desired consistency is met. (Don’t add to much if you are piping it onto the cake.) Beat until fluffy about 1 minute. Refrigerate until ready to use.
Pin
Share
Share
Tweet
Email
Share
0 Shares